How Unlikely Was the Historic 11-10 Score?

I found this article highly enjoyable for the interesting modeling problem from the strange point system in football.

You may have heard that the game between the Pittsburgh Steelers and San Diego Chargers on Sunday was the first NFL game in history to end in an 11-10 score. But that, in itself, isn't a first. Plenty of plausible scores have never happened, and 262 other scores have occurred exactly once. 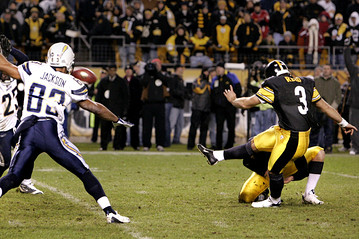 
Also surprising is the rarity of certain scores: There hasn't been a single 7-3 finish in the NFL since the league adopted the two-point conversion rule in 1994, even though scores of seven and three points are the most common ones in the sport: a touchdown followed by an extra point and a field goal, respectively. The last 7-3 final score came nearly 15 years ago, when the New York Giants beat the Philadelphia Eagles. (Had last season's Super Bowl ended after three quarters, the Giants would have lost by that same score.)

These statistics come courtesy of Doug Drinen, a mathematician at the University of the South in Sewanee, Tenn., who maintains the Web site Pro Football Reference. Of 13,480 games played in the NFL and its predecessors going back to 1920, through Sunday, 218 ended in scores of 20-17, the most-common final score. The runner-up, 17-14, has occurred 177 times. Five times a team has won by the margin of a single safety, 2-0. No team has ever won with four points — two safeties — and just eight times has a team won with eight points, which is a touchdown and a two-point conversion or two field goals and a safety.

"Football scores are funny," Driner wrote me in an email. "Did you know that teams win more often when they score 13 points than when they score 14? It's a cause-effect thing. In order to get 13, you (usually) need two field goals. And teams don't kick field goals if they're down by 20 points. So teams lose 35-14 more often than they lose 35-13. That's why scoring 13 is better correlated with winning than scoring 14 is. In order to score 11, you need either a two-point conversion or a safety. Safeties are rare, obviously. Two-point conversions are not rare, but they tend to happen in predictable situations, none of which would arise in a game that ended 11-10."

Safeties turn out to be less rare this year: There's been one every 10 games, the second highest rate since the merger of the NFL and AFL in 1970. For want of a better explanation, Drinen chalks this up to "random variation."

There is one scenario that might have made an 11-10 score possible without a safety: If a team trailing 10-3 scored a late touchdown and didn't like its chances in overtime, it might go for two to win in regulation. The Kansas City Chiefs attempted such a play earlier this month, only they were down 20-19 rather than 10-9, and the two-point conversion failed.

I asked a few sports number crunchers to calculate how unlikely it is that the score 11-10 has never occurred before. Before doing the calculations, they all pointed out a major caveat reflected in that Chiefs game and in the revelation that teams that score 13 points are more likely to win than those scoring 14 points: Scores of the winning and losing team are not independent. "The two teams tend to get roughly an equal number of possessions," said Phil Birnbaum. "So if one team has a high score, it's likely to have had more possessions than average. The other team therefore also probably had more possessions than average, and it probably has a higher score, too. Another reason is that teams sit on a narrow lead at the end of a game, which keeps scores close. A third reason is that teams will go for a last-minute field goal instead of a touchdown when the three points is enough to win, which again keeps scores close."

So while it's possible to calculate what percentage of games have featured a team scoring exactly 11 points, and multiply that by the frequency of games in which a team scored exactly 10 points, the result would be skewed. Still, Birnbaum gamely calculated the probability. He figured there were 3,777 games since 1994 through Sunday, and twice that many final scores, because each team has one in each game. That's 7,554 scores. Of those, 461, or 6%, were 10 points, and 20, or 0.3%, were 11 points. Multiply those two probabilities by the number of games, and double the result because 10-11 and 11-10 are the same, and you find that we'd expect just over one 11-10 game since 1994 — which is just what we now have.

Birnbaum used the same logic to evaluate which scores have occurred since 1994 more or less than you'd expect, if each team's score was truly independent. Among the rare breeds, 7-3 is the true outlier — we'd have expected 7.5 such scores, rather than none. (Remarkably, no game has finished 7-0 in that span, and just one game has finished 3-0. Also underrepresented are 24-13 and 31-20, while 20-17 happens more than twice as often as you might expect.
Burke tried a different method that avoids some of the problems of assuming each team's final score is independent of the other. He calculated the probability of a 10-9 final score since 1978, the dawn of the NFL's modern age of higher scores. Fewer than 0.3% of games ended this way. Then he estimated that in those games the team with nine points had a roughly 2.7% chance of tacking on a safety, as that's the typical safety rate in recent years. That works out to an expectation of slightly less than one 11-10 game since 1978.

With all these analyses, it's important to keep in mind that when dealing with rare events, there aren't always explanations. "There has been a 19-5 game but never a 16-5 game," said Hal Stern, statistician at the University of California, Irvine. "There's not a real explanation for that."

Thanks to reader Eric Gordon for suggesting the topic, and to sports statistician Benjamin Alamar for his insights.

Further reading: If you've ever entered one of those Super Bowl pools where each contestant chooses the final digit in each team's score after each quarter, you may profit from reading Drinen's analysis of the probability. The final score of the Steelers-Chargers game probably should have been 18-10; an official's botched call may have cost gamblers millions. The Associated Press's report on the historical nature of the 11-10 score noted that it was the first in 12,837 NFL games. Drinen's tabulation of 13,480 included postseason games, as well as those of the short-lived All-America Football Conference. How much is a safety worth? You might guess two points, but Burke argued recently that it's worth more than a three-point field goal because the scoring team gets the ball back.

Interesting article and a good read. I never realized people performed such diligent analytics over the scores in football games. I thought the 'math' ended with the bets on spreads.

Drinen is a contributor the the fantasy football site I use. Some of their stuff is quite good.

The stereotype is that baseball is the game for statisticians, while football is the game for meatheads, but that's changed quite a bit in the past decade--both within the game with the advent of coaches like Belichick, who never played pro football; and outside it with the advent of fantasy, which offers lots of interesting problems for numbers geeks to work on for fun and profit.
"You can take a lot of reckoning, but you can't take it all."