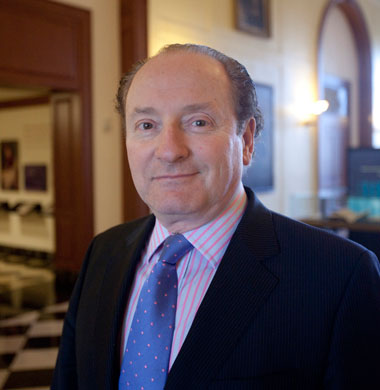 Robert C. Merton, winner of the 1997 Nobel Prize in economics, will rejoin the faculty of the Massachusetts of Institute of Technology’s Sloan School of Management to focus on training students in quantitative finance.

Merton has been at the Harvard Business School for 22 years where he was the John and Natty McArthur University Professor until his retirement at the end of this month. He will retain his association with Harvard, as an emeritus professor.

Merton, 65, will teach in Sloan’s Master of Finance program, which was launched last year, MIT said in a press release.

Only in its second year, the MIT Master in Finance program saw a five-fold increase in number of applications this year. The program received 950 applications for the 2010 incoming class, up from 175 the year before. The one-year program costs $72,000 in tuition. According to its website, the program seeks to address the broader area of finance, instead of financial engineering, a narrow area which suggests "quants and traders only". With a brand new building recently added, the university is studying the viability of expanding the MFin program's class size from 60 in the near future.

Reached by phone in Boston, Andrew Lo - Director, MIT Laboratory for Financial Engineering told Quant Network that Merton will teach a newly designed course which is currently under development. His return secured only days earlier, Merton will help MIT establish a financial research center where government agencies and private companies can tap into the university's vast technical resource and finance expertise, said Lo.

In addition to teaching and research, Merton will be involved in leading conferences and executive education seminars aimed at providing sophisticated financial training for senior managers and regulators. He will take up his new role on July 1.

In 1997, Merton was awarded the Nobel Memorial Prize in Economic Sciences with Myron Scholes (of the famed Black-Scholes formula) for their work on stock options. Together with Myron Scholes, Merton was among the board of directors of Long-Term Capital Management (LTCM), a hedge fund that failed spectacularly in 1998 after losing $4.6 billion in less than four months.

“We need people in the private sector, but also in finance ministries, and central banks who understand how the system works, and how to improve it,” said Merton. “We need people with strong quantitative skills who understand complex instruments and how risk is transferred; we need people who know how to build models, but who also have the breadth of finance knowledge and judgment to make sound abstractions and know well the models’ limitations, the art of the science. MIT, because of its history, its culture, and its approach, is the ideal place to take up this task of educating the next generation, and to do it on a large enough scale to have a macro effect.”

Merton said he will also continue his work on the development of a next-generation pension system. His Nobel Prize-winning work, which he began at MIT, where he earned his Ph.D. and was on the faculty for 18 years before moving to Harvard, focused on a method for determining the value of derivatives.
QuantNet Online Courses * QuantNet Guide/Master reading list * Track MFE application status​
I

If the proof in the pudding is eating it, then my sincerest condolences to anyone having to take classes from this proverbial turd.

as usual, you really have no clue what you are talking about
I

He was one of the partners of LTCM, which went bust spectacularly.

proof of what? Read the book "When Genius Failed" so you learn a bit of what went on there. Also, you were not there so you pretty much know nothing of this guy involvement.
I

Read it. I remember how he got "sidelined", but at the same time, he was pretty far up there on the power structure.

neither you nor me were there and, from my experience, if you are not calling the shots (and it seems he wasn't), you are at the mercy of others.

alain said:
as usual, you really have no clue what you are talking about
Click to expand...

Glad to hear Merton is active and well, continuing his work at the top of the field.

In the last decade, LTCM blew up, Taleb attacks the Black-Scholes model and quants are blamed for the global meltdown and the Flash Crash. Does he deserve the criticism?

Is there a line to be drawn between academic and practitioner? This is a very key question for quants.
S

alain said:
as usual, you really have no clue what you are talking about
Click to expand...


Come on you gotta love the guy

IlyaKEightSix said:
I'm wondering if this sounds bigbadwolfish or Talebian enough...my sincerest condolences to anyone having to take classes from this proverbial turd.
Click to expand...

Ilya, please do yourself a favor and listen more, opine less. In general. You can't fit the whole world into a little box, in a way that conforms seamlessly to your models and judgments. In Taleb's words, have the courage to say "I don't know," and be more skeptical about the quality of your knowledge.

I say this out of the utmost compassion: I used to be like you, thinking I had it all figured out and that widsom and success were a mere matter of finding the "right" principles and values, then expounding on them 'til I was blue in the face. The fragility of that way of life eventually caught up to me--the sooner it catches up to you, the better.

Taleb may hold back nothing in his polemics, but he has at least paid his dues. I can't speak for the bigbadwolf; that guy sits on a high horse of unmitigated cynicism while his real qualifications and experience remain a mystery. His positions, while questionable, are at least developed with lucid reasoning and concrete citations.

not worth your time, folks.

Ergodic said:
I can't speak for the bigbadwolf; that guy sits on a high horse of unmitigated cynicism while his real qualifications and experience remain a mystery. His positions, while questionable, are at least developed with lucid reasoning and concrete citations.
Click to expand...


I am no-one of consequence. But I have worked closely with people with real influence and so understand that power and politics are primary. Economics serves ideological ends and its predictive power appears to be almost nonexistent. Much of quant finance -- to the extent it can be called a discipline -- serves as a fig leaf to fool the great unwashed into thinking that impersonal mathematical ideas like SDEs govern financial behavior rather than backroom deals or inspired hunches. If you wish, you can call this "unmitigated cynicism."

I have nothing against Merton, incidentally. He will probably be a good teacher (though I don't really know).

Taleb is good because he points out both the frailty of our supposed knowledge and our misplaced hubris. He has been a trader with a feel for the markets and he understands how misplaced an abstract mathematical approach (with a priori assumptions like normal distributions) towards market behavior can be. He would wet himself silly thinking of some of the profs who have never made a single deal in their lives solemnly pontificating about the importance of sigma-algebras in understanding finance.
A

In defense of all ‘contrarians’

For anyone with unbiased interest in hearing both sides of ‘quant finance’, bigbadwolf serves as a refreshing contrarian voice on this forum that seems to balance out what some may perceive on part of some “newbies” as unquestioning faith in what has already been proven to be a very shaky paradigm (i.e., unknowing and unquestioning, and therefore probably incomplete understanding of mathematics). For those few who seem to represent the hubris and arrogance of the quants and probably most of the recent problems associated with their criticism, it may be advisable to closely study philosophy of mathematics and philosophy of calculus to recognize the failure on the part of what Buffet characterized as ‘formula driven quants.’ The problem as always seems not to be with knowledge or techniques such as mathematics, quantitative finance, or algorithms but with those who are not yet prepared to know how to handle them effectively. As one who has had the privilege of seeing some of the world’s greatest 'contrarian' dealmakers (whose bets literally moved the world: such as the big short of the British pound and the invention of junk bonds) use some of one’s own risk ventures, I think that because of bigbadwolf and other veterans of Quantnet such as Alain, Andy, etc., QuantNet seems to be the most ‘balanced’ extant social community of quants who laudably aren’t afraid of taking a necessarily cautious and somewhat skeptical view of their trade while mastering it.

bigbadwolf said:
I have worked closely with people with real influence and so understand that power and politics are primary.
Click to expand...

Fair enough, although I remain a little curious. In retrospect, I could have moderated the strength of my adjectives. Keep in mind I might have been deliberately provoking you.

Much of quant finance...serves as a fig leaf to fool the great unwashed into thinking that impersonal mathematical ideas like SDEs govern financial behavior rather than backroom deals or inspired hunches. If you wish, you can call this "unmitigated cynicism."
Click to expand...

What I call cynicism you might call realism. In my view, those two words exist on a continuum for which there may not be an absolute central reference point from which to distinguish them. The world keeps turning nonetheless.

Now, let's see...how does one un-hijack a thread? Or is the term "dejack?" Either way, this thread is jacked.

The way to un-hijack a thread is to start talking about the topic again.

I was on the phone with Andrew Lo of MIT for a good half hour on Monday when we called up MIT to get quotes for our article. I was asking specifically whether the addition of Merton means the MIT MFin program is going to be more quantitative.

If anyone goes to their website and look at the FAQ, it says that their program isn't similar to Financial Engineering ones, but rather finance in a broad sense.

And the answer from Lo is no. It doesn't change the direction. It's more about MIT investing more to make it a financial research center in the Boston area
QuantNet Online Courses * QuantNet Guide/Master reading list * Track MFE application status​
I

It might be seemed a curious fact that the famous BS formula assign the same price for the right to buy stock with -100% and +100% expected returns with any small volatility when strike price is the same. Selling trash ‘-100’ and buy ‘+100’ supper with the same small sigma one arrive at the arbitrage with probability close to 1.

My chance at UCB? Or CMU/MIT