MFE Application Numbers and Jobs - Back on the Rise? 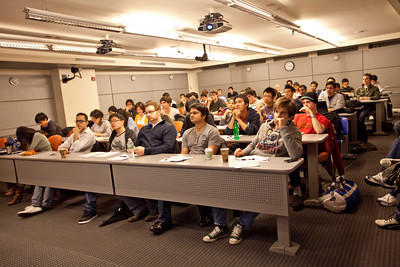 Stocks weren’t the only things to plummet during the global financial crisis. Masters in Finance and Masters in Financial Engineering programs, even at top universities, saw application numbers take major hits after several years of exuberant growth.

As we saw last September, even with the crisis largely over, students hadn’t fully regained their earlier enthusiasm for the finance industry. The 2011 admissions decisions will be telling as to whether or not graduate school interest and corresponding optimism for the financial industry job market, are back on the rise.

Although admissions decisions have been coming out for a few weeks (see the MFE Application Tracker for the most current updates) most university programs said they did not yet have numbers on the incoming class. From what we’ve seen so far, however, students seem optimistic about their prospects in the industry.

Princeton’s Bendheim Center for Finance is still ironing out the final stages of the admissions process for its Masters in Finance program, but Wendell Collins, Princeton’s director of corporate relations, was able to confirm that the University had a record-setting year, with 730 applicants. Though lower than the reported pool of 800, it still represents a marked jump for the program, all the more striking given students’ reduced interest since 2009.

Collins attributed some of rise to factors specific to the Princeton program, such as growing alumni ranks and greater visibility. But it may also indicate a broader trend towards pre-2009 student numbers, as Collins said job market trends are also a likely factor.

“The fastest areas of growth and opportunity in finance post-crisis are front office roles with a quantitative skillset, a space where our program tends to stand out,” Collins said.

Elsewhere, early reports have indicated that the number of applicants this year may be best on record. Columbia University's IEOR department received over 1,000 applications for its MFE program, a more than 50% jump from last year, sources in the department told Quantnet.

Predictions for the finance job market post-recession have been confounded before, but several have described a shift towards front office roles, the more traditional aspect of investment banks that involves working with customers to raise funds in capital market or advising on mergers and acquisitions, as well as sales and trading and investment management among other roles.

With financial reform likely to put the brakes on some of the more exotic financial instruments that were riskier but also more lucrative for firms, a greater emphasis will fall on traditional capital-raising functions.

Reforms are also likely to bring new requirements for transparent pricing, which could present opportunities for those of a quantitative bent and capable of accurately modeling observed market behavior and volatility.

Perhaps more than any other sector, risk management looks to be headed for a hiring boom as a result of the new regulations. Headhunting firm Odgers Berndtson’s 2010 report found that banks and firms of all types have higher demand for risk professionals. It’s one of the few areas in investment banking that will likely see growth as a result of the crisis.

Other sectors expected to be scouting new talent include commercial banking and hedge funds. Although commercial banks haven’t completely recovered, for the first time since 2008 weekly commercial and industrial loan growth crossed into the positives in January and demand is predicted to increase.

While these roles haven’t typically attracted recent graduates, if job growth remains low more people may look to firms outside the traditional Wall Street top picks. And with finance graduate programs attracting ever-increasing numbers of students, having a strong quantitative background will be expected in a wider range of roles.

Graduate programs are already responding to the perceived anticipated increase in front-office roles.

Kevin Arnold, Director of Graduate Admissions at Claremont McKenna, said leadership and decision-making play a role in their assessment of MSF applicants, because these new roles bring will bring a new emphasis interaction with customers.

Although a change, it will nonetheless be welcome news if industry and student optimism is on target and financial industry job market growth returns.

And on the rise they are.
As noted on our wiki, the 2012 numbers leave little down that there is no shortage of applicants to these type of programs, despite the tuition cost and uncertainty about career services or job prospect.
QuantNet Online Courses * QuantNet Guide/Master reading list * Track MFE application status​

A
Cornell MFE vs. ESSEC MiF for S&T