Let's talk a little bit more about the VIX.

In the last post, when the VIX was at 36 or so, I said it wasn't high enough and indicated more shock was to come to equities.

Today, once more, the market eventually gave up and began its third major selloff of this week. Sure enough, the VIX spiked over the very significant 40 level mentioned yesterday. You'll note that it did so right around 1 pm est. Just then, two significant headlines scrolled onto everyone's Bloomberg screens.

The first was a release from Sen. Schumer that said, essentially, "The government has a plan." This was later elaborated on as a new Resolution Trust type entity to purchase mortgages from banks. The next was a story about the decision by the nation's three largest pension funds, Calpers, California Teacher's, and New York State Common, to no longer loan shares of major investment banks to short sellers. Either of these stories would have been a red flag to short sellers. The action taken by the funds may have forced a short covering scramble in the financials.

In the last discussion I alluded to the fact that, while it has certainly seemed like The Financial Apocalypse during the last week (and may have been), the VIX had been loitering in "ho-hum" territory. Until today, when it broke into "crisis" territory as the market sold off hard around mid-session. This, and the news releases, amounted to a clear signal to buyrightnow, and the VIX finished the day back in merely "tense" range.

It's conceivable that the Fed observes the VIX and has chosen 40 as its action level. As stated before, the VIX is a "fear index." A reading of 150+ was associated with the level of panic in the markets on October 19, 1987, and 40 is clearly crisis level. Whether by design or coincidence, action was taken before it had a chance to push into extreme territory, and an escalation of fear was avoided.

Observing the historical VIX chart below shows that no reading has begun to approach the extreme of October 19, 1987. And yet, in terms of fearful events, 9/11 dwarfs that day. And all the other ones, for that matter. What has prevented the VIX from making such a dramatic move in times of market crisis? 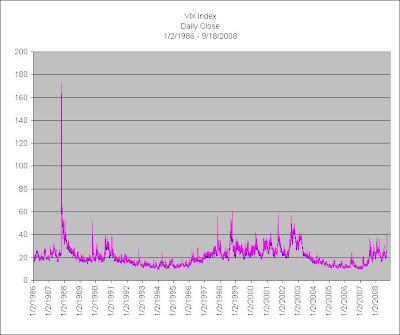 I believe the answer is what is colloquially called "The Greenspan Put." In a nutshell, the term refers to the Federal Reserve's commitment, under the direction of then Chairman Alan Greenspan, to decisively inject liquidity into the financial system in times of crisis. It happened so often in his tenure (1987, Gulf War, Mexican Crisis, Asian Crisis, Russian Default/Long Term Capital, Y2k, Dot-Com Crash, 9/11 terrorist attacks)* that it earned a nickname.

Mr. Greenspan became Chairman of the Fed just a few months before the crash of 1987, and stayed there until his succession by Ben Bernanke in January, 2006. Their combined tenure as Federal Reserve Chair comprise all but a sliver of the left-hand portion of the time series depicted in the VIX chart. The policy of being ever-ready with liquidity in times of crisis has continued under Mr. Bernanke, and is likewise referred to as the "Bernanke Put."

The reason the VIX hasn't since hit that early extreme is that the market learned that the Fed was, under Greenspan, and still is, under Mr. Bernanke, serious about preventing any kind of panic that would cripple the financial system. In other words, just as the chart indicates, panic has been mitigated by the Fed; the market has confidence that the financial system will not be allowed to collapse.

Or at least, it has thus far. As alluded to previously, we're still in early innings. What's happened so far has been largely systemic. By that I mean, the inability of the market to objectively price risk, coupled with a well-intentioned but disastrously flawed accounting requirement (FASB 157) , has forced a devaluation of assets by fiat -- an approach akin to saying, "if they can't be priced they must be worth a quarter on the dollar, or a dime, or worthless." This of course is ridiculous.

However, it has led to the current de-leveraging of banks and brokerages, resulting in huge and unnecessary business failures and mergers, and massive evaporation of wealth, loss of confidence, and demand for what capital is available. To call it an historic dislocation of markets is no overstatement.

But what still remains to be experienced is the writedown of assets that occurs not because of some market mechanism, but because indeed a recession has come -- spending shrinks, jobs are lost, GDP growth diminishes. When people have a hard time making ends meet, they have a hard time paying their credit cards. And there is a lot of leveraged credit-card debt in bank portfolios. And those assets resemble the mortgage-backed securities we just watched drive the VIX to crisis levels. One key difference is that credit-card structures aren't backed by anything as sound as real estate -- even overpriced real estate. Credit card assets are backed by pawn-shop fare.

And, too, are the $1 trillion in "Alt-A" mortgages in various portfolios. These are the so called "liar loans," interest-only teasers, and those facing interest rate resets. The Fed currently has control over about half of these, via Fannie and Freddie, and so these will surely be absorbed by this year's version of the Resolution Trust Corp. The good news is that, being backed by real property -- albeit overpriced real property -- they will retain a meaningful fraction of their value. It's even possible, though not likely, that the assets will appreciate, net to the taxpayer (by that I mean, using the cost basis incurred by agencies who bought them).

It will be imperative that the credit markets begin operating normally, and the mortgage assets now irrationally priced become properly priced, before the effects of recession are manifest. A recession severe enough (and is there any reason to believe a recession under current conditions will not be severe?) could trigger another round of mortgage and then credit card asset defaults, resulting in more of what we just lived through. The Fed has acted very wisely, in my opinion, by creating a vehicle to purchase troublesome assets until they can be priced fairly, thereby removing them from the markets temporarily.

There is one more nagging issue. When the VIX hit "Panic" in 1987, the Fed acted decisively, and calm was restored in amazingly short order. Presumably, the Fed hadn't exhausted all its resources in that action. Most likely, its very willingness to act inspired enough confidence in private capital to get back in the game.

This time, however, is different. Private and public capital has been coming into the game in substantial amounts for months. Fed loans this quarter to banking institutions amount to $194 billion, versus a historical average of $16 billion, in constant dollars, per quarter. Banks have raised $352.9 billion of capital (may overlap the Fed loan amount). If the VIX creeps back into "crisis," say, perhaps, if Alt-A's or credit-card master trusts start defaulting en masse, will there be capital enough to inject? And, if not, will the payments system lock up? Let's hope not.

In summary, then, today the VIX hit "crisis" territory, and was brought back by the Greenspan/Bernanke Put, just like it has been for the last 18 years. If it tests "crisis" again, will lack of Fed and private capital force it into "Panic?" As of this writing, I do not believe the action of the VIX has fully registered the magnitude of the current crisis. While I hope the Fed Put did its job, I am not yet convinced we've seen all the market fear we're going to see. Preparing the removal of troublesome assets from the books of publicly held banks until they can be rationally priced by the market, as done by the Fed today, is a wise move. It prevents a massive, systemic drain of wealth from the market. It is essential that real assets are rationally priced in the event of a recession, which will surely test capital adequacy with regard to defaulting credit card master trusts and Alt-A mortgage assets.

saw this on a really cool blog.

That cool blog, for the curious: train of thoughts
​

A Collection of Risk Management Videos