Oct. 2 (Bloomberg) -- One of the stock market's latest villains is a 32-year-old self-described ``math geek'' from a Minneapolis suburb who won't move to Wall Street unless they let him wear flip-flops.

Matthew Paschke, who manages the $165 million Grizzly Short Fund at the Leuthold Group,
says short sellers like him have become scapegoats for the financial crisis that's wiped out $20 trillion from stocks and brought down Bear Stearns Cos. and Lehman Brothers Holdings Inc.

Once again, short selling isn't the problem, unless it is done out of proportion to the float; that is, without having to borrow shares (naked-shorting). Market-makers in stock (of course) and equity options can naked-short as a matter of business course, but they are exchange members and are therefore accountable to the marketplace and will be penalized for abusing the exemption.


Is it a little tough to do business as usual? Get used to it: it's tough for everyone. It's a crisis.
I

I like this guy's style. Shorts, flip-flops, and a hedge fund called the Grizzly Fund.

Talk about out of the ordinary...

The short selling ban is over, folks. Let's see if the thesis was right.

The Securities and Exchange Commission's ban on short selling, which sparked a series of similar bans around the globe, was intended to be a "time out" and "restore equilibrium to markets." By the time it expired Wednesday night, the general view was that it added to market confusion and didn't do much to halt the slide in financial stocks. 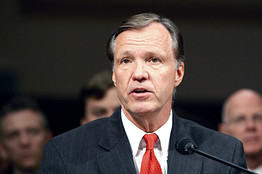 Getty ImagesEconomists at the SEC, under Christopher Cox, are studying the ban's impact.

"I think what we did was we gave these stocks an artificial boost for a while, but it was pretty short-lived," said Charles Jones, a professor at Columbia Business School. "It was just like a glass of orange juice, and then we had the sugar crash a couple hours later."
The ban applied to nearly 1,000 stocks, most of them financial institutions. Between the ban's introduction on Sept. 19 and Wednesday, the Dow Jones Industrial Average fell nearly 19%. An exchange-traded fund tracking financial companies, the Financial Select Sector SPDR Fund, was down nearly 26%.
Mr. Jones said that comparing financial stocks with the overall market suggests there was an "initial bump" for the stocks covered by the ban, but gradually that group "has been giving it all back."
Arturo Bris, a finance professor at IMD, a business school based in Switzerland, said he is conducting a study of the ban's impact on the markets. Early evidence shows "the ban was counterproductive," he said, and by "not allowing shorting, the market has dropped even more. Short sellers act as a cushion." In falling markets, short sellers often step in as buyers to cover their positions.
SEC economists are also studying the impact of the short-sale ban. In short selling, investors borrow shares and sell them, hoping they can buy the shares later at a lower price and turn a profit.
'Short' Life for Rule

The SEC is continuing to work on a rule that will require institutional investors, including hedge funds, to disclose their short positions to the SEC. Initially, it said it would make those positions public, but under the latest draft the disclosures would be made only to the SEC. The rule is expected to be final by the end of next week.
Even after the government lifts its short-selling ban, several large institutional investors say they will voluntarily keep certain shares out of the hands of short sellers.
About a dozen U.S. pension funds, holding combined assets of more than $1 trillion, have temporarily suspended their practice of lending the shares of some financial companies, according to Christopher Ailman, chief investment officer at the California State Teachers' Retirement System, who has made personal appeals to pensions nationwide to limit their share lending.
"I'm very concerned that when the government short-selling ban comes off, the practice will pick up again," Mr. Ailman said, noting that Calstrs isn't currently lending shares of Morgan Stanley, Goldman Sachs Group Inc. or State Street Corp. Now that the government has lifted the ban, "we'll take action into our own hands to protect our fund," he said.

I'll add my opinion: it was counter-productive. There's an article out there about how the short-selling ban reduced liquidity in a number of markets that hitherto functioned perfectly, namely equities and options. Volume was down 40% in the equities; transaction costs raised. Options market-makers quit the business entirely for inability to hedge their positions. (Gee, who could have seen that coming.) I think academic studies on the matter (a few years down the line) will find that the short selling ban was a fiasco.

Furthermore, we saw the market substantially more volatile and make huge declines (these are qualitative assessments -- we were all there), substantially larger than any before (yes, I know that there were bigger events at that time). It failed to prevent a complete freeze in lending, and the government again coordinated the purchase of two huge banks; AIG received another $40 billion for bad brokerage bets; the government pushed through the bailout (which does not address the root of the problem in a concerted way); the government began buying commercial paper to prevent a total and immediate economic collapse. Insurance companies are starting to collapse.

Yes, this is correlation, not causation, but that's the point: the short-selling ban had no positive, and probably quite a few negative effects. I dare not go so far as to say that Bear and Lehman collapsed because owners of the stock sold, and not because short sellers magically wished the prices down.

I could further make this political, but I'll resist the obvious jabs at our regulatory institutions and policy-makers.
C

you can read my rebuttle to the VIX thesis in that article (or a similar one in Bloomberg) on my blog.

The short selling 'debate' has been compressed into soundbytes and, unfortunately for those accustomed to thinking in soundbytes, it requires a bit more discernment than that.

Under some circumstances, short selling is just and wise. Under others, it is abusive. Can anyone describe either of the two, and what properties they might have?

Without a doubt, the most volatile day I have ever witnessed for equities.

It seems you have some good things to say on this blog, but where is it? Perhaps you can share a link?

Naked CDS and Buying Fire Insurance on Your Neighbor's House

Things You Need to Know to Follow the Financial News