The top 10 hedge fund managers have earned more than $153bn for their investors since they were founded, a third of the 7,000-strong industry’s returns, latest research shows.
Since they opened, George Soros’s Quantum fund and John Paulson’s Paulson & Co have together made more money than Walt Disney or McDonald’s.


Paulson’s returns – $26.4bn – are only just short of the net income of Boeing since Mr Paulson opened the firm in 1994.
The study by LCH Investments, an investor in hedge funds managed by the Edmond de Rothschild Group, comes as some money managers look more closely at hedge fund returns. Investors typically pile into a fund after strong returns, missing out on the best years.
Rick Sopher, chairman of LCH, said what most of the top funds had in common was that they strictly controlled capital inflows, so that they did not become too big to hurt their strategies.
David Tepper’s Appaloosa Management, for example, has earned investors $12.4bn yet runs only $12.5bn after regular cash returns.
However, several top managers said a lack of market direction was making trading tough.
Louis Bacon, whose Moore Capital came eighth, said multiple smaller countries were influencing the markets as credit worries came to the fore.
“The markets have become like the European Union in that there are so many people that have a seat at the table,” he said. “It waters down the leadership and confuses the focus, causing more commotion than direction.” 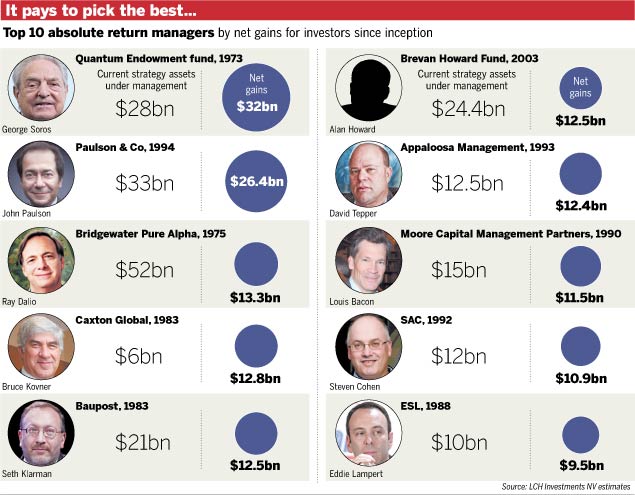 Nice. How many of them are quant hedge funds?

echostate said:
Nice. How many of them are quant hedge funds?
Click to expand...

Hedge Fund Manager Loses 99.8% In 9 Months, Tells Investors He Is "Sorry" For "Overzealousness"