What are the boundary conditions for the Forward contract PDE?

When solving the PDE for the value \(V\) of a European call option under the Black-Scholes model using a finite difference scheme, we have that
Forward contract

What follows is the Matlab code that computes the exact value of the option at time 0 (V_exact in the code) and the value approximated by the Euler explicit finite difference scheme (V_euler). The initial/terminal condition is applied at line 26 (F = ST), the next two lines are for the left end condition (F(1) = 0) and the right end condition (I don't know what to put here).

This is the plot with spot prices at time T (vector ST in the code) on x-axis and option prices at time 0 ((F-K)*exp(-r*T) in the code) on y-axis. As you can see the there is a problem when the option price approaches the biggest value of the spot price, since the curve goes from linear to exponential, I guess this is due to the fact that the right end condition is missing 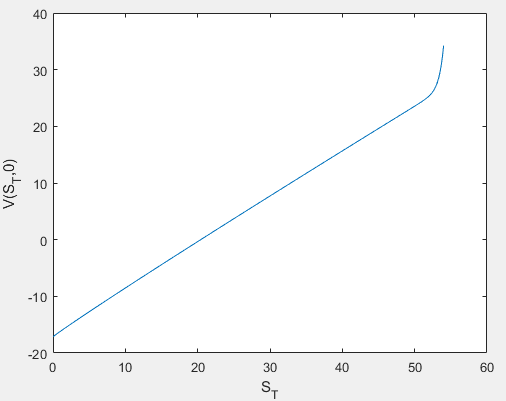 why post the same question on 2 forums (btw I am Cuchulainn).
R

Daniel Duffy said:
why post the same question on 2 forums (btw I am Cuchulainn).
Click to expand...

Rabelais said:
I did not know that there are the same people on the 2 forums
Click to expand...

Just me!
Anyways, how is it working out?
R

Daniel Duffy said:
Just me!
Anyways, how is it working out?
Click to expand...

I confirm you that when using the exact solution at Smax as BC then the plot is correct, ie it is a straight line.
I'm now trying to implement the BC \(F_{SS}=0\), I see that you are talking about the tridiagonal matrix, but since I'm using Euler explicit i did not use the matrix form but I just do

Code:
that is F is a vector, and for example F(1:end-2) is the vector F without the last 2 elements.
Is it possible to implement that BC also in this case? Thank you very much for support

Taking the exact solution as "fallback" is a good test to see is the full assembled scheme is OK.
I don't use \(F_{SS}=0\) myself (I use domain transformation or price a put) but I reckon it should work. In general, the matrix will no longer be tridiagonal.

A possibly good option is Neumann BC at boundary: \(F_{S}=1\) since F is essentially S -K there.


Here's a scheme that uses Neumann BC, might be worth investigating (N.B. they assume convection = 0).

I agree with Daniel : true boundary conditions are good, but just for testing purposes, because you will end having a payoff-dependent pricer.
F_SS = 0 is better, but you will loose some nice properties doing so.
If you are working with schwartz model, try F_S= 0 (Neumann), it might work.

R
How to perform Monte Carlo simulations to price a Forward contract under the Schwartz mean reverting model?

L
Calculation of the upper stochastic dominance bound of an option