From Russia With Cash: Seeding a Hedge Fund

ANDREI VAVILOV — Russian multimillionaire, well-connected energy magnate and nascent hedge fund manager — smiles broadly in a Manhattan restaurant as a lawyer, a lobbyist, an economist and a former congressman praise him over shots of vodka and a lavish spread of lamb, salmon and beef tenderloin.
Skip to next paragraph 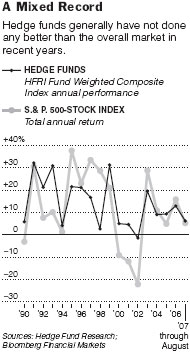 They toast Mr. Vavilov, 46, as an architect of Russia's fledgling market economy and a maverick financier whose philanthropic contributions to universities in the United States and abroad have produced important financial research.
"Congratulations on your newest venture, this hedge fund of yours," says Thomas B. Evans Jr., a former Republican representative from Delaware. "I mean, I don't know much about it, but I am sure it will be a big success."
If Mr. Evans is hoping to learn more about Mr. Vavilov's new fund, the IFS Hedge Fund, he may have a long wait. Throughout his career, Mr. Vavilov's bookishness — he is fond of wire-rimmed glasses and a buzz cut — has belied his reputation as a shrewd back-room operator whose business and political relationships have followed a circuitous and largely silent path from Moscow to London to New York. Even by the standards of hedge fund managers, whose activities are often shrouded in secrecy, Mr. Vavilov occupies uniquely murky territory — at the intersection of shadowy Russian oil riches and fast money on Wall Street.
Mr. Vavilov, who survived an assassination attempt about a decade ago while working in the Russian government, says he personally pocketed $600 million when he sold his oil company, Severnaya Neft, five years ago. Since then, he says, he has invested $200 million in his hedge fund, which he incorporated in the Bahamas in 2004. He has yet to raise money from outside investors, but he is setting up shop in New York to do exactly that — at the very time that hedge funds, started by everyone from former Wall Street trading stars to former professional hockey players, are encountering the potentially brutal uncertainties of a national credit squeeze and market turbulence.
In the first eight months of this year, the average hedge fund generated after-fee returns of 6.1 percent, compared with 6.9 percent during the same period last year, according to Hedge Fund Research, a Chicago firm. In each year, those returns only slightly outpaced the Standard & Poor's 500-stock index, and a basket of stocks linked to the index typically carries less risk than investments in the more highflying world of hedge funds. Investors who place their money with hedge fund managers expect them to handily outperform the S.& P. 500 over time, and they are willing to cede hefty fees to them for the privilege of doing so.
For his part, Mr. Vavilov — who says his fund has garnered annual returns of more than 20 percent since its start in 2004 by placing global, macroeconomic bets that he declines to describe in any detail — remains unbowed by the challenges sweeping across the hedge fund landscape. He says that he is positioning himself to play a central role in the potential privatization of a Russian government fund that holds $130 billion in oil proceeds, and that his hedge fund should be a beneficiary if that state fund is privatized.
He also says he brings another advantage to the table: smarts. "We've created a strategy that allows me to get high returns without some of the risks that are associated with volatility," he says. "I sleep well and don't have insomnia worrying about what's happening to my money."
As the prices of oil and other natural resources like nickel and aluminum have soared, Mr. Vavilov joins the ranks of wealthy Russian business titans trying to put fresh riches to work here and in other markets outside their country. They say they are doing so in order to protect assets from corruption at home and to gain financial legitimacy in the West.
"What you see is a glut of oil money in Russia seeking its way into calmer waters," says Ariel Cohen, a senior research fellow at the Heritage Foundation, a conservative research organization in Washington. "These Russian tycoons and oligarchs are looking to place their money in jurisdictions with more rule of law, and where they are not subject to expropriation by the state."
IN recent years, many of Russia's wealthiest tycoons have gone on an overseas spending spree. Some of their transactions have been high profile, like Roman A. Abramovich's purchase of the Chelsea soccer club in London and the oil giant Lukoil's purchase of Getty Petroleum, a deal orchestrated by Vagit Alekperov. Other transactions have drawn less attention, like Vladimir O. Potanin's acquisition of a 35 percent stake in Plug Power, a fuel cell developer, for $241 million this year.
Skip to next paragraph Enlarge This Image 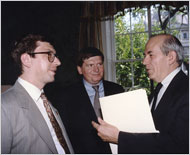 Andrei Vavilov, left, in 1993 with Konstantin Kagalovsky, center, and Michel Camdessus of the I.M.F. Mr. Vavilov was then deputy finance minister.

Many of the financiers behind these deals benefited lavishly from the pell-mell business privatizations of the years when Boris N. Yeltsin was Russia's president and, having weathered the tumult that followed, now either toe the line in Vladimir V. Putin's Russia or leave the country. Much of this has occurred against a backdrop of widespread graft.
"There is really no such thing as local capital in Russia, only local corruption," says Martha Brill Olcott, an analyst at the Carnegie Endowment for International Peace in Washington. "The challenge for Andrei Vavilov will be succeeding in a market where things are mostly black and white, instead of Russia, a country where deals are done in the gray."
Mr. Vavilov has never been charged with a crime, and he says that anyone who does business in Russia is unfairly tainted by the country's image as a haven for rampant corruption. Still, since his days serving as a deputy finance minister of Russia from 1992 to 1997, Mr. Vavilov has been saddled with suspicions that he grew rich through dishonest, insider deals. In 1997, Russian federal prosecutors began investigating whether Mr. Vavilov embezzled $231 million as part of a fighter-jet deal, according to Mr. Vavilov and others with knowledge of the inquiry. The investigation is continuing, and Mr. Vavilov has repeatedly denied any wrongdoing.
"If you succeed in Russia, everyone wants to get a piece of you," he says. "Unfortunately, envy and jealousy is a big thing in my country and when you make a lot of money, people want some of it. I spend a lot of money on lawyers."
Mr. Vavilov brings more than attorneys to his new role as a hedge fund manager. He is also a Russian senator, with a seat in the upper house of Parliament. And he has criticized Russia's central bank as not being more aggressive about how it invests the assets in the $130 billion government fund, also known as a stabilization fund, which the country maintains to protect the federal budget from fluctuations in the price of oil.
Along with many others, Mr. Vavilov has also advocated privatizing the stabilization fund. He is among several business and political figures in Russia angling for access to those billions, and he sees his hedge fund as a logical repository for some of that money — as well as cash from well-heeled American investors.
"I am confident that there will be no shortage of money coming in," he says. "I don't have to lift my fingers; people will line up to put money in. The money is the last thing that I am worried about."
Some people think that such confidence might be misplaced. "It's a very tough time these days to start a hedge fund, regardless of strategy," says Nicole M. Boyson, an assistant finance professor at Northeastern University. "Most investors are like, 'Yikes, why would I go into a hedge fund when I already scared of the plain-vanilla market.' "
Still, some experts say, Mr. Vavilov has one competitive advantage over most hedge fund upstarts: $200 million of his own money is invested in the fund. "Look, it's always a tough sell unless you have an angle," said James R. Fenkner, chairman of Red Star Asset Management, a hedge fund based in Russia. "But guys like Vavilov didn't make this kind of money working the night shift. And to start a fund with $200 million of your own money is already a heck of an edge."
AS Mr. Vavilov recasts himself as a hedge fund manager, he is spending more time outside Moscow. He has also gained entree to the clubby world of top-tier hedgies. In April, for example, he flew his private jet — a Boeing 737 — to Las Vegas to attend an exclusive gathering of fund managers organized by Drobny Global Advisors, where he mingled with other millionaires amid conversations about such arcane investments as Turkish glassmaking stocks and Brazilian farmland. He says his taste for socializing goes only so far, however, and that he passed on participating in the conference's charity poker tournament, called Hedge Against Poverty.
"It is not fun for me to gamble," he says. "You know why? I always win."
He says he relishes being the outsider, a role accentuated by his strained English and need for an interpreter. Born and raised at the boundary of Europe and Asia in Perm City, a small town in the Ural Mountains, he moved to Moscow as an adolescent. He says his father worked as a patent researcher in Moscow; his mother was a construction engineer. He showed an early aptitude for math and science and, after his father died, contributed to the family finances by working as a computer programmer in high school.

Russian multimillionaires are a separate story. You need to really know every individual to be certain that his wealth is not part of "USSR cake" that collapsed in 1991.
And we will never know all the details about these people

I
I do not think MFE degrees are as valuable anymore.
2