How to perform Monte Carlo simulations to price a Forward contract under the Schwartz mean reverting model?

I have 200 monthly spot prices of a commodity (oil) and I have to model the prices using the Schwartz mean reverting SDE:
\[ dS = \alpha(\mu-\log S)Sdt + \sigma S dW \] where W is the standard Brownian motion, mu is the drift, sigma the volatility, alpha the strength of mean reversion (these parameters are estimated from data).
This commodity is the underlying asset of the Forward contract with price at delivery F(S,T), where S is the spot price at time 0 and T is the expiry time.
Such a contract is equivalent to having an option with \( \text{payoff}(S_T)=S_T-K \), where K=F(S,T) is the strike price.

Knowing this information, how to run (I'm using matlab but other languages are fine too) a Monte Carlo simulation to price this particular option? Usually, these are the steps to follow
however, I'm having some problems with this framework. This is what I tried so far

These are the steps for the Monte Carlo simulation:
However, as you can see from the image below, the curve of the option prices obtained with the MC simulation is smooth, while what I was expecting was a curve similar to the one of the exact solution. So I made some mistakes somewhere

p.s. if you prefer I can write the code here 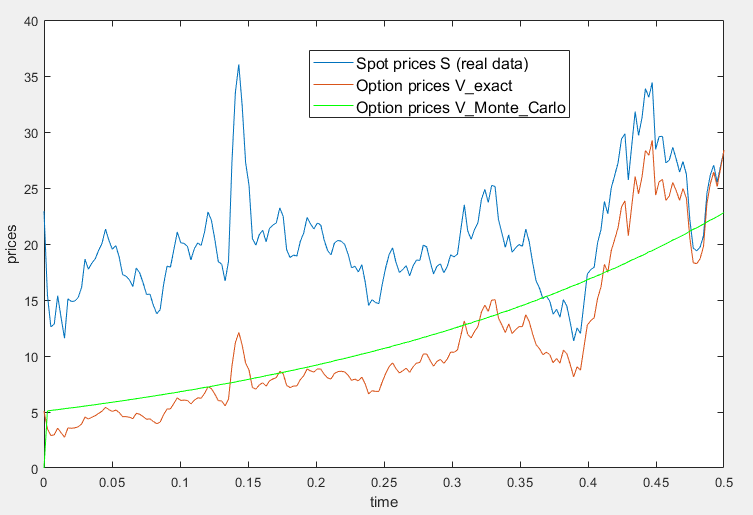 R
What are the boundary conditions for the Forward contract PDE?