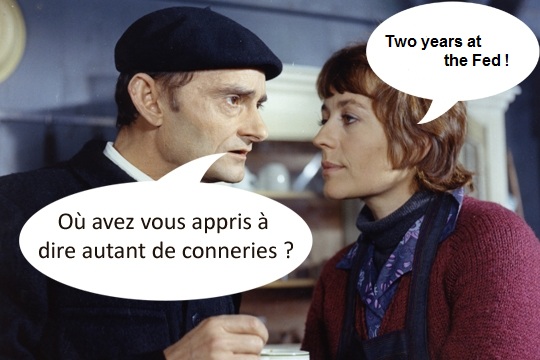 The title of this piece was shamelessly plagiarized from the 1970 French hit-comedy with the almost identical title, and directed by Michel Audiard. To anyone living in and around Wall Street, the plot should appear remarkably familiar, but please allow me a brief recap for the financial ingénues and rating agency analysts among us. There should be plenty of those, since the demand for rating analysts is now just about equal to that of Maytag repairmen.

It was a major hit in France, good enough to warrant its own 1972 sequel, entitled “elle cause plus, elle flingue!”<sup><strong>[1]</strong></sup> In my humble, uninformed opinion, the only thing funnier to come out of France is the fairy tale that Jerome Kerviel actually lost $7 Billion at Société Générale. Mind you, if that were true, there would still be hope for international French finance.

The cast is a who’s who of the French New Wave. Annie Girardot plays a gossip queen/cleaning lady with three different household-clients around Paris. One, Bernard Blier, is a bank teller who has previously murdered his boss (no problem so far) and buried him in his own backyard. This type of home grown solution, so to speak, is typically French. Hollywood-obsessed Claude Chabrol used the same trick as the centerpiece of one of his more famous productions. The second is a priest by day, drag queen by night (so far, this is standard Wall Street fare). That role is played by Sim, a noted French actor with a much longer name, evidently too long for a successful career. The last member of this lovely triptych is a well-known TV anchor, a “former” prostitute now engaged to a famous politician. This is played to perfection by the voluptuous Mireille Darc, Alain Delon’s long-time girlfriend.

The basic plot is simple, as is that of all great films. Through her work at her clients’ homes, Girardot soon learns of their dirty little secret [DLS] and starts to blackmail each one in turn while making sure her name never surfaces. It would be rude to tell you the ending. All I can say is that it’s definitely worth a trip to the video store. Even if you don’t speak French, you’ll understand every word of it. Clearly, were this picture to be shot today, it would no longer be fiction but more like a Ken Burns documentary on the crisis. I saw this movie many years ago, but I never imagined it would turn out to be useful in my work in structured finance. Lo and behold! To my utter surprise and considerable delight, it is the ideal backdrop for my first, bold and risky move into screenwriting.

I propose to take you deep inside the sub-prime crisis. Since this sordid tale will no doubt require more than a single exposé, please allow me to restrict today’s public offering to the banker’s DLS. You won’t be disappointed.

In the meantime, let your imagination run wild regarding the thinly veiled identity of the slutty TV anchor, one quite willing to kick someone off her show, but never off her bed. As far as the holy man-drag queen combo is concerned, I’m not sure exactly what to tell you guys, but if I were you, I would seriously consider looking in the direction of some respected member of the community (a bean-counter perhaps?), a pillar of society who might have already confessed publicly he was doing “God’s work” by day. To be perfectly frank, the character of the priestly drag queen requires a more focused reflection on my part, the kind of thoughtful, top-to-bottom treatment I can ill-afford right now. How do the French say that again: “re-culer pour mieux le sauter!” But enough speculation! We have a tale to wag!

Believe it or not, you will now be transported back to the adrenaline-laden atmosphere surrounding the aftermath of the legendary collapse of the twin Bear Stearns hedge funds, two wet dreams that, by the way, were neither hedged nor funds. This event is now recognized as heralding the entire subprime crisis. As you will recall, both perpetrators were later found not-guilty by a jury of their peers pursuant to an admittedly botched trial. In the end, I’m not sure what scares me more, that they should have been found guilty or not, because I was really hoping they knew what they were doing. In passing, I’m sure most of us would really like to hire the lawyers who managed to locate an impartial jury consisting of “peers” of the accused. This must have been a competition for the lowest IQ in New York.

Yet, this was but a mere prelude to the “pièce de résistance”, i.e. the Fed’s Bear Stearns bailout, the biggest mistake since Operation Barbarossa. Therefore, let me know replay with attempted Germanic precision what actually transpired in DC on the eve of that momentous breakthrough in facile, short-sighted and naïve financial analysis. In what follows, film aficionados should have no trouble discerning some of their favourite titles.

Presently, Timmy and Ben are discussing the looming national disaster, i.e. that Timmy’s son may never get into Harvard, and how to prevent it. Suddenly, the door swings wide open and an imposing presence is felt:

Timmy: It’s too late boss! My son told me so!

Ben: Not for me! You stay here Timmy. Someone has to guard the jelly-bean jar. Besides, you may have the eye for DC-sleaze, but you sure don’t have the stomach.

At that precise moment, Ben storms out of the office in a huff, taking refuge by Hank’s side now on his knees outside the door. Hank knew he had one chance, one last chance to save democracy by demonstrating financial leadership, which he did via swift, Beltway-minded (he never thinks above it) action!

Hank: Ben, I really need you to come through on this one pal! The crime of the century deserves the man of the century: the Princeton man! If I don’t get his money back, Floyd’s going to crucify me. You know that’s what he pays me for!

Ben: Relax old boy! We’ll just say it was stolen at Scores or something!

Hank: I can’t lose Floyd, I can’t! He gave me my own portfolio in the Caymans’, with my own stock written in Sanskrit so nobody knows about it. If I can’t give him his money back, I won’t be able to eat a free lunch in New York for years. You need to get that cash back for me Ben or I’ll be forced to move to Cleveland and never do another deal, ever again!

Ben: This happens all the time Hank! What am I supposed to do, tell the American people we lost a trillion of their savings playing Black Jack in Vegas? Forget it dude!

This was “do or die” for Hank. Luckily, he was a master of deception, of the MI5 double cross, not to mention desperate.

Ben: Hank, this could be the start of a beautiful friendship!

And the rest, as they say, is history.

Now, although this was good enough for Bear Stearns, when AIG collapsed, apparently due to a malfunctioning director’s fear of bodily-fluid contamination, Hank knew he had to outdo himself, to take the bull by the tail and face the situation. Effectively, he had to go ballistic, literally over the top. Dustin Hoffman might be good enough for Bear, but the AIG caper required a more transcendental, virile approach. This time, he knew he had to dig deeper into Hollywood lore, and come up with “The Full Monty.”

And now, exclusively on Quant Net, a sneak preview “Inside the AIG Bailout”:

Ben: Hank, I don’t understand what happened (that’s got to be the biggest understatement since the Pope’s “the Spanish inquisition was a mistake” pronouncement of 20 years ago)? You said letting Lehman go down was the right thing to do, the end of the crisis, and that everything would be fine. Now, it’s worse than ever. Obama is totally bummed out! You need to tell him something man. Otherwise, he may give my job to somebody else!

Hank: Relax about the President Benny. He’s under control, trust me. In fact, this AIG thing is just what Doctor K ordered.

Ben: But I told everybody I didn’t have the authority to save Lehman. What am I going to say now!

Hank: Benny, you said a lot of things last night. You said I had to do the thinking for both of us. Well, I’ve done a lot of it since then, and it amounts to one thing: you’re bailing out AIG.

Ben: What! Again! Unbelievable dude, unbelievable! Alright, alright, but I need to figure this out pronto. …………. Wait! Ah! Ah! I know exactly what to do: you figure it out! You got what you wanted, didn’t you?

Ben: But what will I tell the American people Hanky? If I lose this job, I’ll never get another one. I won’t come back. You know that don’t you?

Hank: Oh Benny, I’m not bad at being ignoble, but it doesn’t take much to see that the scams of two weasels like us don’t amount to a hill of swaps in this crazy world! If you don’t bail out AIG, you’ll regret it, maybe not today, maybe not tomorrow, but some day. And hey, we’ll always have Goldman!

This was by far the most mythical, meta-magical moment of Hank’s entire career. In one fell swoop, he had finagled the biggest rip off in history for the benefit of the Firm, and all in the name of truth, justice and the American way.

What lay ahead for Hank? Knighthood, if not sainthood, was definitely in the cards. Meanwhile, he could always go back to fondling snakes.

Disclaimer: All characters and events portrayed in this story are fictitious. Any resemblance to actual persons, events or places is purely coincidental.
[1] She no longer gossips, she kills!
Last edited by a moderator: 12/25/13

F
Thought I Bombed The Onsite Interviews, But Was Invited To Dinner Afterwards

WU vs UvA vs Dauphine