I hope they don't nationalize Citi. The UK has already started using Northern Rock as an instrument of policy. Can you imagine the US Congress with a bank like Citi in its hands?

In other news, I fear that GM may be well and truly dead. The only question is when the administration will decide to stop throwing money at the corpse.
"You can take a lot of reckoning, but you can't take it all."

bob said:
I hope they don't nationalize Citi. The UK has already started using Northern Rock as an instrument of policy. Can you imagine the US Congress with a bank like Citi in its hands?
Click to expand...

Yeah, if they nationalize Citi and keep it that will be a disaster. If nationalization used as a tool to sell company quickly by parts, it will be a different story.

Anyway, Citi is already nationalized De facto. It's only a matter of time when this will be recognized De jure.

Citi stock is now penny stock? where were BEAR and LEH trading before they went out of bussiness?
This is getting more and more surreal each day. Big, powerful multi-international corporations are dropping dead like flies. If miracle doesn't happen soon, it will get to the point where there is absolutely nothing the government can do to help except to let the market runs its course.
This is like a very bad dream.
QuantNet Online Courses * QuantNet Guide/Master reading list * Track MFE application status​

Was suprised when heard CNBS news last night using "socialist" to decribe the "YES, WE CAN" administration's way of "rescue".

Would be really interesting to see how the "CORE" runs CITI after it put its hands in AIG. I don't think it's wise to throw more money for GM neither. Might be not bad to get rid of the UNION and re-construct.

Let compare how sub $1-Citi compares to other firms. Bloomberg does the calculation below.

Citigroup, run by Chief Executive Officer Vikram Pandit, is now the 184th biggest bank by market value, behind Malaysia’s Bumiputra-Commerce Holdings Bhd and Turkey’s Akbank TAS, in which Citigroup owns a 20 percent stake, according to data compiled by Bloomberg.

“You can finally buy Citigroup shares at the dollar store,” said Diane Garnick, who helps oversee $354 billion as an investment strategist at Invesco Ltd. in New York. “The banking industry is about to enter the era of entrepreneurship as the umbrella model fails and companies will position themselves to focus on one niche.”
QuantNet Online Courses * QuantNet Guide/Master reading list * Track MFE application status​

Yeah, these are events to talk about with future generations.
After the Great Depression, this is the most "spectacular" market period. And we are not done yet, with all optimism, it will take another few years to go back to a "routine". Perhaps we would never go back ...

Even though the S&P 500 has been treading water over the last few days, spreads on high yield debt continue to sink like a stone. Based on the Merrill Lynch High Yield Master Index, spreads on high yield bonds are now down more than 56% from their peak back in December, and over 7% in the last week. At a level of 956 basis points over comparable Treasuries, spreads are currently the lowest they've been since the initial days following the Lehman bankruptcy. In order to reach 'pre-Lehman' levels (854 basis points), high yield spreads now only need to fall another 10.7%.
Click to expand... 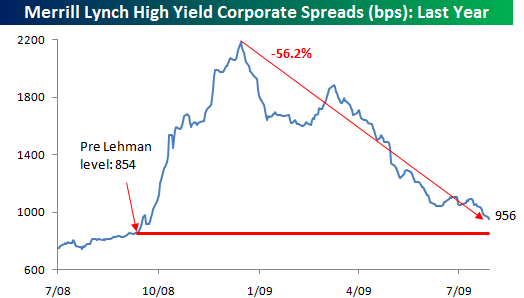