Top U.S. policy makers emerged from hours of tense negotiations with a clear message just after midnight Sunday morning: A deal to bailout U.S. financial markets has been agreed on and all that remains to be done is to commit the legislation to paper. 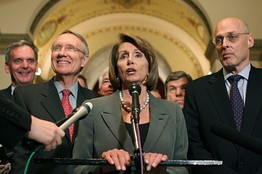 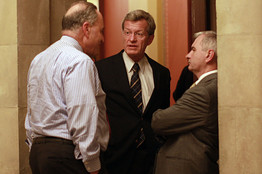 The bailout negotiations had taken a step forward Friday, when Senate Democrats agreed to include an insurance-based scheme as an option as part of the Wall Street bailout package in a bid to win support of House Republicans, who have been the main obstacle to reaching an agreement.
After an apparent agreement was announced by lawmakers Thursday, House Republicans threw a wrench into the process by saying they would not support the deal, proposing instead their own alternative plan. That plan would be based around the idea of an industry-funded insurance pool to provide certainty to the markets, rather than a taxpayer-funded scheme.

Everyone involved got a little something: ownership interest, pay caps, less money up front...

REINVEST, REIMBURSE, REFORM
IMPROVING THE FINANCIAL RESCUE LEGISLATION
Significant bipartisan work has built consensus around dramatic improvements to the original Bush-Paulson plan to stabilize American financial markets -- including cutting in half the Administration's initial request for $700 billion and requiring Congressional review for any future commitment of taxpayers' funds. If the government loses money, the financial industry will pay back the taxpayers.
3 Phases of a Financial Rescue with Strong Taxpayer Protections

CRITICAL IMPROVEMENTS TO THE RESCUE PLAN
Democrats have insisted from day one on substantial changes to make the Bush-Paulson plan acceptable -- protecting American taxpayers and Main Street -- and these elements will be included in the legislation
Protection for taxpayers, ensuring THEY share IN ANY profits

On a side note, did Pelosi and Reed have the brainpower to come up even with this outline of banalities and cliches ("oversight" and "transparency")? Every time I look at Reed, I see a stupid and insipid grin plastered on his face. Are these tribunes of the people up to the task of crafting a regulatory framework? I wonder. Neither do I have high hopes concerning either Obama or McCain, both of whom are clearly way out of their depth.
S

probably they did not have brains to understand...but you should keep in mind that the brain behind all this is Hank Paulson, who knows the markets and govts inside out not only US, but almost the entire world..

Subramaniam said:
probably they did not have brains to understand...but you should keep in mind that the brain behind all this is Hank Paulson, who knows the markets and govts inside out not only US, but almost the entire world..
Click to expand...

Paulson wants carte blanche with no strings; it's these nincompoops who are (correctly) arguing for regulation and oversight. I doubt, however, that they have the brains, expertise, or even the patience to craft the careful details such a program must inevitably require.
C

"Here Nancy, hold this and stand in front of the camera. Smile!"

Nancy Pelosi is like the puppy fetching the paper: someone else wrote it, someone else bought it. But she gets the photo op. That's how you keep 'em appeased.

Your copies of the movie "Wall Street" might become collector's items now, like your grandparents' 78 rpm Al Jolson records.
I

All of these "strings" won't ever be exercised in any form of enforceable way anyway. If the money is needed, we'll be right back here in Washington in two months when credit still needs more cleaning up, and the extra "oversight" and "regulation" is a joke.

You think a politico is going to understand quants' black boxes? Funny.

There's always a race between Washington and Wall Street/Hedgistan to impose new rules vs. finding a way to circumvent those rules and return to business as usual. And my money is on the actual smart guys working at Wall Street--because they make the rewards big enough for the best and the brightest to come to work for THEM to create new techniques to play AROUND the rules rather than to work for the government to enforce them.

One thing you can be CERTAIN of is that this will NOT be the end of the bubbles. People will still find something to speculate on, and GS and MS will still find ways of making a pretty penny off of it, one way or another.
S

agree...Has over regulation ever worked? even if the regulation was effective, it only served driving out capital from one geography to another?

We saw enron explosion, Sarbanes Oxley came by: and guess what : London AIM got lot of IPO listings which might have come to NY, taking with it the liquidity..

Same, with the non-dom" tax in London.. Never it seems that the politicos ever read/understood the "Goose that lays golden eggs story".

What I think could potentially happen with all these market disruptions and potentially half baked solutions is some new center like Dubai might eat NY and London's lunch.

I really hope some good far sighted leadership finds a sensible path towards retaining or improving our current standing.
C

The market doesn't seem to think this deal is done. Or, if done, will work.

The market may be obstinate, but she isn't stupid: There have been at least three times in the last week that some congressman has said, "we have a deal," and there was no deal. She's skeptical.

I'm skeptical that any deal will help for long. Can you picture these banks, which are deleveraging at lightspeed, taking this cash and going to market with it in search of returns? I think they have other things to do with it, including keeping a lot of it handy as shark repellent.

To whom do you lend? Who's in the market to take on debt at tough spreads, to go out and make big capital investments at what most people seem to think is the begining of a recession, not the end?

Perhaps enough market participants will wake up next week, see the sun shining, and do a cannonball right into the deep end, but I sort of doubt it. I see them dipping their toes in at best.
"You can take a lot of reckoning, but you can't take it all."
C

As it is geared to simply keep capital flowing, I don't think an emergency intervention such as this is intended to address the reticence of banks to loan - that's something only their (hopefully chastened and wisened) judgments about risk and reward can address -- and under no circumstances should any government presume to make those decisions.

To enable them to lend is a structural matter. To tell them how and when is a tactical one and in my opinion way outside the jurisdiction of the monetary authorities.

That said, once again, I agree with you. But again, this is not without precedence in quality, even if it is in scope (although, adjusted for GDP growth, I don't know if that is true).

In Chairman Greenspan's book are several anecdotes from his tenure that readily lend context to the current situation.

***
Two very large MetaBanks have pulled off some meta-coups of late. A trade that is bad in time of stress might turn into a real winner in the long run; the key is staying power. For those deemed "too big to fail," the government has come alongside to provide staying power.

the market has gained quickly from its day's lows.. Dow is now down 400 pts from yesterday..

Just imagine the traders (esp the algorithmic ones) who become rich and well as bankrupt with such vol..

When will a little more sanity return?
C

Subramaniam said:
the market has gained quickly from its day's lows.. Dow is now down 400 pts from yesterday..

Just imagine the traders (esp the algorithmic ones) who become rich and well as bankrupt with such vol..

When will a little more sanity return?
Click to expand...


When people make prices. The over-the-counter market might just become the market of preference for the forseeable future.

[edit] Bit of a blanket statement, I apologize. The point was that when the objectively "unpriceable" assets are priced, the market will know where it stands.

Of course, apart from a massive capital infusion, there is no immediate bottom on those asset values, as further market declines necessitate further capital calls. And this begins to spell recession, which pressures those asset values even further. Think "feedback loop."

So, uncomfortable as it seems, the market IS pricing those assets after all -- and it's pricing them at recession prices.

Market's reaction to this bailout is just unreasoable as it can be: simply slumped no matter the plan being passed or rejected.

We paid out tax anyway, and in stead of seeing it being used to bomb other countries, I would rather it could possibly save more people from unemployed by bail those a!@# on the street!
S

Things start moving quickly. Feels like 2 weeks ago, staring at the stock price (GS and MS down between 15-20% :-ss:-ss:-ss

The ride isn't over yet. Everyone in the House is up for re-election / eviction this year, and there are only 5 weeks to go. They have to campaign sometime....

Meanwhile, it looks like the commercial banks are getting their turn. Wonder how many will be left when the election results are announced?
"You can take a lot of reckoning, but you can't take it all."

This bailout is not for MS
Everybody down in two digits today...UBS, CS, MS, GS.....

I don't see why anyone should be worried. The fundamentals of our economy are strong.
QuantNet Online Courses * QuantNet Guide/Master reading list * Track MFE application status​
S

I agree with you (though not too many will be on our side )
However everything changes. The fear is that a freeze in the credit market for 1 year or more will hit the economy. This will convert back to a hit for the financial sector. The boulder can start rolling ...

Tax on sale/purchase of financial instruments