Ill be moving to NYC next month from India...Will be great to hear about the city from others..
Specifically Do's and Dont's!!!

Don't buy umbrellas at the street corners when it's raining. The're junk.

On evenings, weekends and holidays the MTA teams up with Mensa to devise sadistic IQ puzzles.

amanda.jayne said:
On evenings, weekends and holidays the MTA teams up with Mensa to devise sadistic IQ puzzles.

Makes me wonder if they use graph theory.

pandyajwalin said:
Ill be moving to NYC next month from India...Will be great to hear about the city from others..
Specifically Do's and Dont's!!!
Click to expand...

I prefer Google Maps to get around: http://maps.google.com

A few years back I got "lost" in Brooklyn - the NYtimes actually covered that "incident"!

How many English majors does it take to figure out a “Service Changes” poster by which the Metropolitan Transportation Authority tried to inform subway riders about last weekend’s construction re-routings?

I don’t know, but there was a bunch of us veteran New Yorkers at the Hoyt-Schermerhorn station Saturday morning trying to parse one of the diabolical notices. 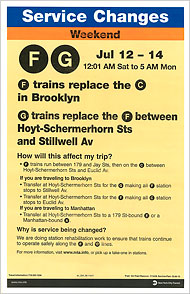 (Who were Hoyt and Schermerhorn, anyway? And did they ever meet?)

Anyhow, about 11:30 a.m. Saturday, bound for my F stop on Carroll Street in Brooklyn, I boarded a southbound F on Bleecker Street. On the train, loudspeakers – actually intelligible for once – blared news of the service changes. Hoyt-Schermerhorn was not a regular F stop but the train did stop there, in order, as advised, to connect to the G which was making the F stops.

I got off just as – happy day! – the G rumbled in on the next track. I jumped aboard. But instead of seeing my regular F stops (Bergen St., Carroll, etc.) I was in unfamiliar territory. We stopped at Fulton St., then Clinton-Washington Aves., then Classon Ave., where, thoroughly disoriented, I got off. Where was I?

A young woman in a floppy newsboy cap saw my confusion and offered a quick diagnosis. “F train problem, huh?” she said, calling the train by a nickname which is not a nice word. She said that when I had taken the G at Hoyt-Schermerhorn I stayed on the same platform when I should have crossed over and taken the train the other direction.

But the M.T.A. poster made no mention of crossing over and taking the G in the other direction, unless you were slick enough to pick up the sly reference to the Stillwell Ave. terminus, which I wasn’t. I crossed over and waited for the G in the other direction, joined now by a dozen other riders who had made the same mistake and were now clustering around a “Services Changes” poster to see how we could have gone so wrong.

But that wasn’t the end of my lost weekend. Saturday night, returning to Manhattan from Carroll Street, I again took the G (replacing the F) to Hoyt-Schermerhorn. As I arrived, the A was pulling in across the platform. I did what many other riders did – we jumped aboard the arriving express. Now we were hurtling through Brooklyn in the wrong direction (for me), passing local stops (trains are only express when you don’t want them to be) until, finally, stopping at Nostrand Avenue. Of course, this is one of the stations with no crossover to the other side, so I had to exit the station, cross the street and go through the turnstile again on the opposite side. Once again, I hadn’t remembered to reverse direction before changing trains.

Then, on Sunday, I was at the American Museum of Natural History and foolishly tried my luck once again. Posters at the 81st St. station said the A was running on the C track – that is, the 8th Ave. express was replacing the usual local. So I waited for the downtown A. Nothing came.

There was no agent at the station to ask. But a helpful musician on the platform was directing befuddled riders. The only thing to do, he said, was to take an uptown A to 125th St. and cross over to head downtown. I got out and took the M-11 bus.

As having grown up in Brooklyn on the F line, I know that pain of having to switch at Hoyt-Schermerhorn. It is one of the more confusing detours.

The other interesting thing about the F line: It has an express track in Brooklyn, part of which goes underneath Prospect Park from 7th Avenue to Church Avenue. Sometimes construction will happen on the local track in the direction you want to take, forcing you to go backward to catch the express train to forward. It can be very confusing.

This may be very helpful

Reach out to an Asian Networking group or something. I am sure you are not the first Indian to move to NYC by yourself.
http://www.MSFHQ.com - Masters in Finance Website
P

bigbadwolf said:
The first "Don't" is: Don't move to NYC. Oops, too late for that.
Click to expand...

Surprising..NYC is said to be one of the best cities in the world!!!
You might be referring to the flip side of this coin!

Stop scaring him, you will do fine . Get a phone the day you land (I got tmobile because the plan had unlimited everything for the best price (minutes, sms and data)), have few numbers from your classmates and people will help you adapt.
Nothing helped me more than Google Maps on my phone.

pandyajwalin said:
Surprising..NYC is said to be one of the best cities in the world!!!
Click to expand...

In what sense? I'd rather choose a city like Amsterdam or Berlin.

bigbadwolf said:
In what sense? I'd rather choose a city like Amsterdam or Berlin.
Click to expand...

I believe the OP is going to NYC for his MFE so in this sense, there is no better place to be because NYC is home to many of the top MFE programs as well as Wall Street.
QuantNet Online Courses * QuantNet Guide/Master reading list * Track MFE application status​

AlexandreH said:
Stop scaring him, you will do fine . Get a phone the day you land (I got tmobile because the plan had unlimited everything for the best price (minutes, sms and data)), have few numbers from your classmates and people will help you adapt.
Nothing helped me more than Google Maps on my phone.
Click to expand...

You'll do fine. Just don't ever stop walking when walking with traffic on the sidewalk. You will be trampled to death.

MRoss said:
You'll do fine. Just don't ever stop walking when walking with traffic on the sidewalk. You will be trampled to death.
Click to expand...

Hehe.
And don't talk to strangers (I am sure your mum told you this one...), don't visit Time Square more than once (if anything), watch out for the dog poops on residential streets...
Don't look in a weird way at people self-talking in NY (streets and subway)...You will see a lot of those.

ExSan said:
This may be very helpful

4/10/21
tips
T
N
COMPARE Columbia MAFN vs Yale MMSAM: Which is better for starting a career in finance?